Charlottesville: The Left in Excelsis 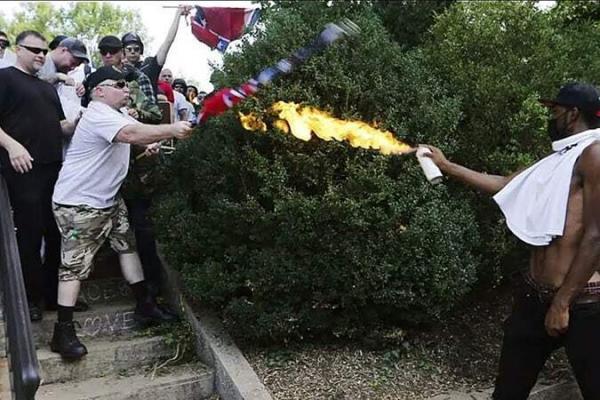 Looking through video footage of the Charlottesville “Unite the Right” demonstrations and the Antifa/BLM reaction covered by Left, Right and supposedly “neutral” mainstream news media, some salient points arise that are applicable the world over: the crapoid Left seem to at least have the self-realisation that they are deeply flawed and project their flawed traits onto Rightists. They are impelled to rage with frustration due to their own inadequacies; the Right tend to maintain good humour. The answer of the intellectually bereft is violence, and the Left is predictable in this. Their rationalisations are based on hypocrisy. What is their ideology other than a string of clichés, spawned from plutocratic think tanks?”

There will be an avalanche of moral outrage because someone injured and killed some of the crapoid Left. Presumably this individual will spend much of his life rotting in jail for the sake of taking down some of those who chose to try and violently shut down a lawful demonstration in defence of a constantly defamed ethnic heritage. What will not be examined are the violent provocations and assaults by the Left. One sees in the video footage a multitude of Leftists armed with batons and using these on isolated Rightists, in typically cowardly manner, without any regard as to whether they might be beating the victim to death. The actions were of a psychotic frenzy. The Left also liberally used pepper spray. A Black woman pastor who seems to have been a primary organizer of the Antifa mob told NBC News that the Right threw bottles, yet the Left’s own video footage shows this to have been initiated from the Antifa mob. She claimed that the night before her peaceful parishioners were attacked while praying. To what extent do anarchists, Maoists, Trotskyites and sundry other retards pray? Lies seemed to have flowed easily from this woman’s mouth, but NBC lapped it up without even a pretence of objectivity.

“Unite the Right” was a lawful demonstration. While the Left armed themselves with batons, some of the Right had makeshift shields and a few had helmets; that is, items of a purely defensive nature. The Antifa/BLM mob were present for the purpose of stopping the Rightist activities through violence. The actions were violent and rhetoric was vehement. This did not seem to be a common trait among the Rightists, who appear to have reacted mainly with banter.

Media have referred to the presence of clergy among the Antifa, with the inference that the Right were assaulting peaceful men of God. What typically sanctimonious trash. Whoever these men of God are, they chose to attend an action intended to violently stop a peaceful demonstration, and if they were motivated by the tactics of their deity, Martin Luther King (as expressed in his “Letter from a Birmingham Jail”) they would have been praying for violence in the hope of martyrdom; preferably someone else’s.

Same the World Over

This is a scenario that has been played out numerous times previously. During the 1970’s a New Zealand school teacher in Britain, Blair Peach, died during a riot against the police in an effort to violently stop a peaceful demonstration by the Right (National Front). Peach was a member of the violence-orientated Trotskyite Socialist Workers Party. There was – for years – a great deal vomited, especially out of mainstream media, about Peach’s martyrdom, in what is routinely called an “anti-Nazi” protest. There is even a “Blair Peach Primary School” in England.

In 2013 in France Clément Méric, another Antifa thug, was killed during a fracas with a few Rightists after he and his comrades began an unprovoked attack on a couple of skinheads out shopping. Méric died due to hitting his head on the pavement, but this was a pretext for the French state to outlaw a nationalist organization for reasons which remain unknown. Méric, like Peach decades previously, had chosen to align himself with the most violent of organizations. The mainstream media somehow managed to portray the cowardly Leftist assault as a Rightist provocation. (Adam Sage, “France’s fascism fear as student killed after clash with skinheads,” The Australian, citing The Times, June 7 2013,

In New Zealand in 2004 the N.Z. National Front held a peaceful protest in defense of maintaining the traditional New Zealand flag, at a time when there were influential moves for change. About 50 Rightists, whose sole purpose was to hold several speeches at a war memorial near Parliament House, were confronted by a mob of several thousand who had for months been agitated by anarchist psychotics, with support from the mainstream newspaper, The Dominion Post. Again, the character traits were those of bitterness and fury from among the Left and good humour even from the majority who were skinheads. What troubled the Left was that despite their provocations the NFers would not react but maintained their discipline, and their humour. As a result many of the Left became hysterical and histrionic, literally. When after several hours the rally ended peacefully, and the NFers attempted to depart in good order, they were set upon by a frenzied mob. One NF stalwart of the time, Cale Olsen, was later caught alone by a mob of dozens, and beaten. The beating of Cale Olsen became a folk legend that was lauded as a great act of heroism by the Left. That the Left lauds cowardice as heroism says much about their collective psychosis. There is not the vaguest comprehension of honour among the Left. There is a moral void; morality being regarded as a bourgeois trait. Those in the forefront of the mob were leaders of the ironically named “Peace Action Aotearoa”, an anarchist front. On the following link you will see the Antifa in all of their heroic glory, having launched a full mobilisation against Mr. Olsen. The blond woman in sun glasses and hat jeering at Olsen is Val Morse, leading “peace activist”. These pictures of the jeering, gutless mob depict a certain type that can be seen in the streets of Athens, Paris, London, Charlottesville… They are what Lothrop Stoddard called nearly a century ago, “the revolt of the underman”.