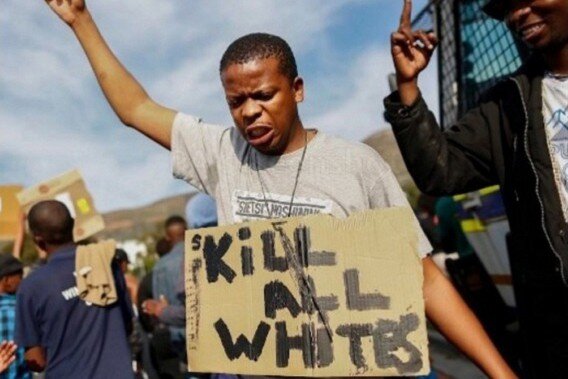 What the ANC and its allies have been aiming for since their assumption to power is about to take place – the confiscation of White farms without compensation. It is part of a process of White dispossession. 82,000 Whites live in poverty (2011 statistics). Some 80 squatter camps mainly of Afrikaners have cropped up. There are those who say that this is just retribution for ‘apartheid’. Julius Malema, who introduced the motion to confiscate White farmland, said there would be no compensation ‘for the criminals who stole our land.’

The mainly Dutch migrants who formed the basis of the Afrikaner people settled at the Cape in 1652. They encountered roaming Bushmen and Hottentots who were engaged in bloody conflict. Migrating Dutch and Xhosa met each other around 1700. There were no widespread Xhosa settlements. What areas the Xhosa had remained as homeland areas under apartheid. The Afrikaner did not confiscate Xhosa lands.

The Afrikaner, wanting to live in peace, migrated (The Great Trek) during the 1830s to be free of British rule. They founded the Free State and the Transvaal, which also lacked settlements. Only Zululand in Natal, was settled. After a war started by the Zulus, with whom the Voortrekers had a pact, the Afrikaners nonetheless left them in possession of Zululand. In the Free State and Transvaal the Voortrekers were attacked by the Matabele, but these were pushed into Rhodesia. Pacts were made between the Voortrekers and various tribes that had been terrorised by the Matabele, and their lands remained with them.

The Anglo-Boer Wars erupted because mining monopolists wanted to secure the gold and diamonds of the Afrikaner Republics. The excuse used for British invasion was that the Afrikaners were ‘mistreating the Uitlanders’ (‘Outsiders’). During the Second Anglo-Boer War (1899-1902) women and children were herded into British concentration camps where 26,000 died of typhus and malnutrition.

The Afrikaners were largely a rural folk (Boer = farmers). Industry and finance were controlled mainly by non-Afrikaners, especially the Oppenheimer mining, industrial, media and financial empire. The Oppenheimer dynasty was always the biggest enemy of the Afrikaner people. When in 1922 White mine workers on the Rand rebelled because of the use Black scab labour, this was crushed mercilessly by the Smuts Government. In reaction an Afrikaner Nationalist Government was voted in, with support from the Labour Party. The policy of ‘apartheid’ (separate development) was evolved in an effort to encourage the self-determination of the thirteen different racial groups, most of whom had little or nothing in common. Of these the largest were the Whites and the Xhosa each with about the same numbers. There is no such entity as a ‘Black’ South African, either before, during or after apartheid.

For decades the eternally persecuted Afrikaner endured the animosity of a combination of Communists and Big Business who used the same rhetoric as the British had used about the supposed lack of ‘human rights’ for the ‘Uitlanders’, to justify attacking the Afrikaners. On both occasions it served as a cover for the control of South Africa’s wealth, and Harry Oppenheimer commented that Big Business, headed by his corporation (Anglo-American) was in the forefront of undermining apartheid, so that a rootless mass of consumers and workers could be created. Even Professor Noam Chomsky, the Left-wing icon, observed that the anti-apartheid campaigners were regarded by Big Business as ‘their troops’. (Chomsky, Understanding Power, 2002, 88-89).

The reason for the much-condemned ‘pass laws’ was to protect South African workers from the huge numbers of ‘Blacks’ who crossed the border for the better living conditions under the Whites, who expended vast amounts on ‘Black’ welfare, education, sanitation, and housing, and the development of the homelands; all now falling to pieces since the fateful year 1994.

South Africa is repeating what happened in Kenya with the depraved Mau Mau, and the rest of Africa. When a court ruled in 2010 that the ANC song ‘Kill the farmer, kill the Boer’, was ‘hate speech’, ANC General Secretary Gwede Mantashe rejected this. Julius Malema had led the singing, the same gentleman who introduced the motion to confiscate White land, with the ironic quip, ‘the time for reconciliation is over’. Since 1994 over 70,000 Whites have been murdered, including over 6,000 farmers, plus an unknown number raped, tortured and mutilated; although the statistics are debated and denied. Cries of ‘bury them [Boers] alive’ ring out in SA’s Parliament.

When a motion was introduced in the New Zealand Parliament to condemn the confiscation of Boer farms it was vetoed by Labour and NZ First. When a bloodbath results the New Zealand Government will be complicit.