Kolionovo v. Usury: a Lesson for the World 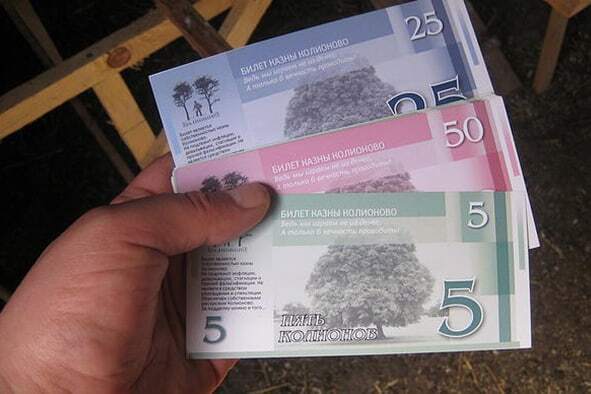 A farmer in a small Russian village could have provided the key to Russia’s resurgence, and indeed to that of every state, family and individual in thrall to usury. However, the kolion has been banned as a “threat” to the rouble. Ironically, the kolion, which is designed to bypass usury and oligarchical-banking, is in accord with the principles of the Russian Orthodox Church, despite the farmer-inventor, Mikhail Shlyapnikov, seeming to have a cynical attitude towards the Church.

Shlyapnikov named the kolion after the village of Kolionovo, near Moscow, as a means of bartering produce and labour between villagers. Hence, Shlyapnikov sought to return to the only legitimate purpose of a currency, to exchange goods and services as a means of exchange, not as a profit-making commodity historically called “usury.”[1] Shlyapnikov states of the kolion, printed in denominations from 1 to 100, “There are no wars, deaths or crises connected with this money. This money is about honest work, fresh air, fresh produce.”[2]

Shlyapnikov stated that Koloniovo residents only got hard cash several times a year, during harvest and sowing. Kolions would allow for the exchange of daily basics. A worker could plow a piece of land for kolions and exchange them for vegetables, fruit or fish.[4]

While economists and bankers might scoff and laugh at such an unorthodox approach as to base currency on a goods standard,[5] such a standard, rather than one that is based on debt, has been used many times throughout history in many states. The Confederate States of America based their “graybacks” on a cotton standard, bypassing international finance when the money markets were denied to them (despite much nonsense being written of the Confederacy as a “tool of the Rothschilds”).[6] Guernsey Island has used a local currency since the mid 19th century, first being issued to stave off bankruptcy and a crumbling infrastructure for lack of currency.[7] The Governor of French Canada during the 17th century cut playing cards into pieces and circulated them as currency when France was too bankrupt to send him money, and goods and services long proceeded to function normally with these pieces of card.[8] The Wara vouches brought prosperity to a German town when the rest of the country was in Depression.[9] On the other hand, like Koloniovo, there have been other localities that have issued currencies or exchange tokens during times of economic crisis and have been brought to heel by the state authorities. The “stamp scrip” successfully issued as exchange tokens in the town of Woergl, were banned by the Austrian state in 1933.[10] In 1938 the Supreme Court of Canada prevented the Social Credit Government elected in Alberta from issuing provincial currency.[11]

The idea for Shlyapnikov was the result of common sense and personal observation:

“Shlyapnikov claimed the idea came to him easily. Frequent barter trade with friends made him realize that a commodity such as a goose or potatoes would be a more inflation proof and make an easier form of conducting trade than the rouble. The alternative fundamentally would fall under a category of representative money, as their value is derived from underlying commodities like potatoes and livestock that can be exchanged in barter form at a future date in order to settle a trade.”[12]

Despite the kolion only being a form of IOU between villagers, and local currencies being acceptable even in the U.K., for example, the State saw this as a threat rather than a positive innovation that could be followed throughout Russia.

The concept extends even to bi-lateral trade, through the reciprocal barter of credits. The objection of such a notion being impossible under the international trading system is refuted by Russia herself, with the bilateral trade agreements that have been entered into outside the international system between Russia and China, Iran, Egypt, and Turkey. Just a few months prior to the prosecution of Shlyapnikov, Putin and the then Peronist president of Argentina Christina Fernandez de Kirchner consulted on the use of national currency exchanges for bi-lateral trade, while an exhibition on Eva Peron was opened in Moscow.[13] But in November the Peronists lost the presidency to Mauricio Macri, an archetypal “oligarch,” in both the Peronist and Russian sense, who seems likely to return Argentina to the path of subordination to international finance. Under the Peronist presidencies of both Kirchners, Argentina and Russia were close economically and diplomatically. Macri is reversing the foreign policy of the Peronist predecessors, eschewing the Bolivarian bloc promoted by the late Hugo Chavez of Venezuela. Argentina’s new foreign minister was quick to assure the globalist cabal in New York at the Council on Foreign Relations that, “The latest development is very close to New York, because, as you know, the economic team has put on the table an offer to the holdouts with the intention to regularize the relationship in the financial front so Argentina again is open to the world in a manner that is predictable and is systemic.”[14] While Macri has stated that Russo-Argentine relations would continue to develop,[15] Russian political scientists are sceptical because of the president’s pro-U.S. sentiments.[16]

Yet in June 2015 the State took Shlyapnikov to Court. For a State that has fought vigorously against oligarchs, the prosecution of a farmer as far removed from oligarchy as it is possible to get, sends mixed messages as to the course Russia can take. In July 2015 a Moscow regional court ordered a ban on the kolion.[17] The court heard expert testimony that the kolion could not be considered as “substitute money;” it was an IOU between individuals, while the prosecution objected that these transactions are not subject to taxation. The finding was that “The Court does not accept the arguments of the defendant’s representatives that since the law does not define monetary surrogates, it is impossible in this case to include koliony money substitutes, which are prohibited by law…”[18]

Shlyapnikov saw the need for the kolion because of the shortage of the means of exchange in his village, although there is no shortage of produce or willingness to work. Under such circumstances, during the Great Depression, masses went hungry while states commanded farmers to destroy food. It is the paradox of “poverty amidst plenty,” and continues throughout the world, not through shortages of resources or labour, but through want of the means of exchange. How bizarre, how criminal, that a farming village with abundant labour and produce should have anyone go without because of a shortage of currency. Yet this is on the microcosmic level what prevails on the macrocosmic level all over the world. Dmitry Surmilo, coordinator of the working group for the Orthodox Financial System, at the Moscow Patriarchate’s department of external church relations, said the same as Shlyapnikov about “access to financial sources being limited,” but for all of Russia: “Now, during a time of crisis when access to financial resources is limited because of sanctions, we are finally being heard. And society has reacted positively to our proposal.”[19] Did the court that shut down the kolion eventually hear?

[5] In New Zealand, for example, Social Credit is dismissed as “funny money,” and this begins and ends the examination of any such proposals.