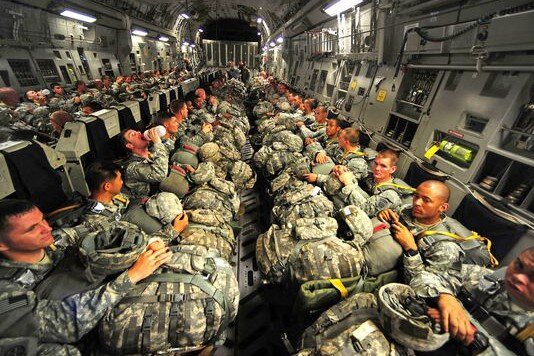 Since the time of Woodrow Wilson’s ‘Fourteen Points’ for a brave new world in the aftermath of World War I, US policy-makers have been motivated by a messianic sense of America’s duty to impose its model of liberal-economic-democracy over the entire world. America has a doctrine that is for export and a desire to implement that on a world scale. There is also something intrinsic about the founding of the USA that makes it – rather than any ex-communist state – the paragon of a world revolutionary citadel: a dichotomy derived from European Rationalism and from Puritanism: both revolts against the traditional order.

Major Ralph Peters, subsequently lieutenant colonel, a prominent military strategist who served with the Office of the Deputy Chief of Staff for Intelligence, whose area of expertise is the former Soviet bloc and Eurasia, appears to have coined the term ‘constant conflict’. This might be perceived as the American democratic counterpart of Trotsky’s ‘permanent – world – revolution’. Peters has written of this in an article by that name in a military strategy journal:

“We have entered an age of constant conflict. …

“We are entering a new American century, in which we will become still wealthier, culturally more lethal, and increasingly powerful. We will excite hatreds without precedent.

‘Information destroys traditional jobs and traditional cultures; it seduces, betrays, yet remains invulnerable. How can you counterattack the information others have turned upon you? There is no effective option other than competitive performance. For those individuals and cultures that cannot join or compete with our information empire, there is only inevitable failure …The attempt of the Iranian mullahs to secede from modernity has failed, although a turbaned corpse still stumbles about the neighborhood. Information, from the internet to rock videos, will not be contained, and fundamentalism cannot control its children. Our victims volunteer.” (Ralph Peters, ‘Constant Conflict’, Parameters, Summer 1997, 4-14, )

Peters is a favourite among the neocon faction of the American Establishment. He serves as strategy analyst for FOX News. If the rhetoric about exporting America’s democracy throughout the world seems analogous to Trotsky’s export of Bolshevik revolution throughout the world, it is because the misnamed ‘neo-conservatives’ derived from a conjoining of Wilson liberal Democrats with Trotskyites and other disaffected Marxists who ended up seeing the USSR as more a hindrance to world socialism than the USA. This is perhaps no better symbolised than when Trotsky’s widow Natalia Sedova quit the Fourth International in 1951 and publicly declared the need to destroy the USSR as the main enemy of world socialism. (‘Natalia Trotsky’s break with the Soviet defensists’, ).

Many Trotskyites became mouthpieces of American messianic liberalism through sponsorship of the CIA in what has been called the ‘cultural cold war’, especially with the Congress for Cultural Freedom, fronted by the ‘lifelong Menshevik’ and recipient of the Congressional Medal for Freedom from Ronald Reagan, Professor Sidney Hook. (Frances Stonor Saunders, The Cultural Cold War: The CIA and the World of Arts and Letters, New York: The New Press, 2000). This Democratic Internationale, having been exposed for its CIA links, was resumed by the National Endowment for Democracy whose founders, in particular Tom Kahn, arose from the same Trotskyite origins as their CCF predecessors, with Max Shachtman, rather than George Washington, as the ideological mentor.

Peters stated that this ‘global information empire’ led by the USA is ‘historically inevitable’. This ‘historical inevitability’ is classic Marx, just as ‘constant conflict’ is classic Trotsky. This is a ‘cultural revolution,’ which is buttressed by American firepower.

Globalist hegemony is being imposed on the ruins of traditional cultures by a culture of ‘comfort and convenience,’ the Huxleyan Brave New World’s serfdom through pleasure:

“It is fashionable among world intellectual elites to decry ‘American culture,’ with our domestic critics among the loudest in complaint. But traditional intellectual elites are of shrinking relevance, replaced by cognitive-practical elites–figures such as Bill Gates, Steven Spielberg, Madonna, or our most successful politicians–human beings who can recognize or create popular appetites, recreating themselves as necessary. Contemporary American culture is the most powerful in history, and the most destructive of competitor cultures. While some other cultures, such as those of East Asia, appear strong enough to survive the onslaught by adaptive behaviors, most are not. The genius, the secret weapon, of American culture is the essence that the elites despise: ours is the first genuine people’s culture. It stresses comfort and convenience–ease–and it generates pleasure for the masses. We are Karl Marx’s dream, and his nightmare.” (Peters, op. cit.).

Here can be seen the Huxleyan ‘addiction’, as Peters refers to it below, which now embraces much of the world as a type of universal Soma. Those who have not succumbed are considered to be the backward ‘traditional elites’ and cultures, the so-called ‘Islamo-fascists,’ and the resurgent orthodox religiosity and traditions of the nations of the former Soviet bloc, with George Soros and NED money ever-ready to try and wipe them out by well-planned ‘spontaneous’, colour revolutions, ‘Arab Spring’ style. Peters continues:

‘Secular and religious revolutionaries in our century have made the identical mistake, imagining that the workers of the world or the faithful just can’t wait to go home at night to study Marx or the Koran. Well, Joe Sixpack, Ivan Tipichni, and Ali Quat would rather ‘Baywatch.’ America has figured it out, and we are brilliant at operationalizing our knowledge, and our cultural power will hinder even those cultures we do not undermine. There is no ‘peer competitor’ in the cultural (or military) department. Our cultural empire has the addicted–men and women everywhere–clamoring for more. And they pay for the privilege of their disillusionment.” (Peters, ibid.).

The ‘constant conflict’ is one of world cultural revolution, with the armed forced used as backup against any reticent state, as in the cases of Serbia, Iraq and now Syria. What it has brought is chaos, and from what Peters and others indicate, chaos is the aim. The world is therefore to be kept in a state of flux, with a lack of permanence, which Peters’ calls America’s ‘strength,’ as settled traditional modes of life do not accord with the aim of industrial, technical and economic ‘progress’ without end.

“There will be no peace. At any given moment for the rest of our lifetimes, there will be multiple conflicts in mutating forms around the globe. Violent conflict will dominate the headlines, but cultural and economic struggles will be steadier and ultimately more decisive. The de facto role of the US armed forces will be to keep the world safe for our economy and open to our cultural assault. To those ends, we will do a fair amount of killing.” (Peters, ibid.).

Peters refers to certain cultures trying to reassert their traditions, and again emphasises that the globalist ‘culture’ that is being imposed primarily via US influence is one of ‘infectious pleasure.’ The historical inevitably is re-emphasised, as the ‘rejectionist’ (sic) regimes will be consigned to what in Trotsky’s term is the ‘dustbin of history.’

“Yes, foreign cultures are reasserting their threatened identities–usually with marginal, if any, success–and yes, they are attempting to escape our influence. But American culture is infectious, a plague of pleasure, and you don’t have to die of it to be hindered or crippled in your integrity or competitiveness. The very struggle of other cultures to resist American cultural intrusion fatefully diverts their energies from the pursuit of the future. We should not fear the advent of fundamentalist or rejectionist regimes. They are simply guaranteeing their peoples’ failure, while further increasing our relative strength.” (Peters, ibid.).

Michael Ledeen (consultant to the US National Security Council, State Department and Defense Department, currently working with the Foundation for Defense of Democracies, which aims for ‘regime change’ throughout the world) as one of the primary advocates of America’s world revolutionary mission, in similar terms to that of Peters, calls on the USA to fulfil its ‘historic mission’ of ‘exporting the democratic revolution’ throughout the world. Like Peters, Ledeen predicates this world revolution as a necessary part of the ‘war on terrorism,’ but emphasises also that ‘world revolution’ is the ‘historic mission’ of the USA and always has been. Writing in National Review Ledeen states:

“…[W]e are the one truly revolutionary country in the world, as we have been for more than 200 years. Creative destruction is our middle name. We do it automatically, and that is precisely why the tyrants hate us, and are driven to attack us.

“Freedom is our most lethal weapon, and the oppressed peoples of the fanatic regimes are our greatest assets. They need to hear and see that we are with them, and that the Western mission is to set them free, under leaders who will respect them and preserve their freedom.

“…[I]t is time once again to export the democratic revolution. To those who say it cannot be done, we need only point to the 1980s, when we led a global democratic revolution that toppled tyrants from Moscow to Johannesburg. Then, too, the smart folks said it could not be done, and they laughed at Ronald Reagan’s chutzpah when he said that the Soviet tyrants were done for, and called on the West to think hard about the post-Communist era. We destroyed the Soviet Empire, and then walked away from our great triumph in the Third World War of the Twentieth Century. As I sadly wrote at that time, when America abandons its historic mission, our enemies take heart, grow stronger, and eventually begin to kill us again. And so they have, forcing us to take up our revolutionary burden, and bring down the despotic regimes that have made possible the hateful events of the 11th of September.”(Michael Ledeen, ‘Creative Destruction: How to wage a revolutionary war’, National Review Online, 20 September 2001, )

Ledeen gives credit to the USA for bringing down not only the Soviet bloc, but also the Afrikaner, as part of the ‘historic world revolutionary mission’ that the USA has had since its founding. However, he states that the task of world revolution was left uncompleted, since the Third World has yet to be brought into the globalist orbit. There is also still a long way to go in regard to Eurasia and the former Soviet bloc, and in particular Russia herself, where there have been reversals in the process of the ‘colour revolutions’ (Ukraine), and where there is increasingly resistance to what is being increasingly perceived as American ambitions towards global hegemony and the ‘unipolar world.’ American internationalism is the one-size-fits-all mentality that had Woodrow Wilson posturing on the world stage, competing as the world messiah with Lenin and Trotsky. ‘The American dream’ (MTV, MacDoanld’s and Coke, Hollywood, Madison Avenue) is as much an affront to the spirit of man as the dialectal materialism of Marx, and expressed in the same rhetoric about the ‘freedom of peoples’, which is the freedom to become an interchangeable economic production-and-consumption unit: homo economicus. Like Marxism, a social pathogen, ‘an infectious plague’, as Peters boasted of it, but much stealthier.