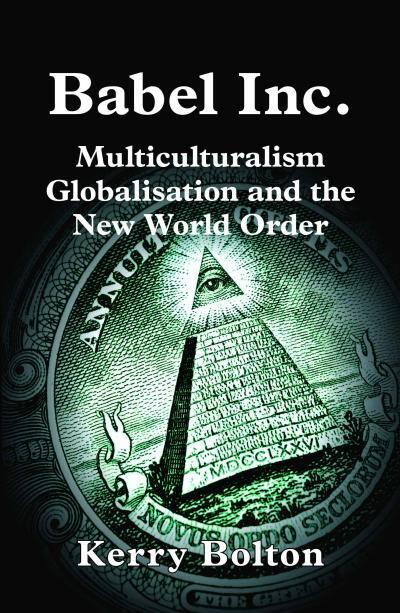 Babel Inc. is an essential primer on the politics of globalisation and multiculturalism. Bolton demonstrates that conventional distinctions between the political left and right have been transcended by transnational corporations who regard the remnants of the nation-state as the last hurdle for global domination and the attainment of their “new world order”.

Babel Inc. is an exposé of multiculturalism as a “social control mechanism” that scorches the earth in preparation for the coming of the rationale of global capitalism: homo globicus. This global man will be at home anywhere in the world because the world will be homogeneously liberal. If that idea seems farfetched now, perhaps at the conclusion of Babel Inc. it will seem less a possibility than a growing reality.

The strength of Bolton’s book lies not just in his studious research of historical facts, but also in his ability to focuses on the theoretical root causes of the problem, i.e., the dynamics of the Enlightenment and its religion of Progress, coupled with the starry-eyed American Puritanism, whose violent and inhumane secular avatars can no longer be ignored.